Edward is a mix-traffic Tender Engine that was built by Sharp Steward & Company in Manchester, England in 1896 & worked on the Furness Railway before arriving to Sodor in 1915 to finish the building of the North Western Railway with Thomas, Henry, Gordon, James, Eagle, E87456, & E98462. After the work was finished, Edward was put in the shed, to the delight of the other the other engines, who claimed Edward was too weak to work anymore in the big yard. Edward was eventually let out again, & proved he was still a useful engine & what he lacked in strength made up for in work ethic.

Edward currently runs the Wellsworth-Brendam branch line with Boco & occasionally Donald, Douglas, & Pete in Trainiac85's Series & helps out as a back engine for the big engines like Gordon on Gordon's Hill. 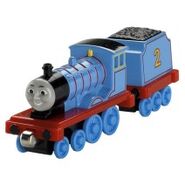